Last week the doctor's group in Germany released an English translated version of their press conference from Sept 20, 2021 where they reviewed the pathology of 8 people who had died within two weeks post covid shot. Some of these doctors also reviewed dozens or possibly around a hundred vials of the various covid 19 vaccine products under microscope.

The press conference was quite long and rather difficult to go through but after watching it a couple times it was clear to me there was a huge amount of important information in this that needed to be edited for easier access. It was in two parts, the first being the pathology report from the autopsies and the second was the analysis of the actual vaccine vials under microscope.

At this point I've edited 5 short clips which are mostly from the vaccine vial anaysis (see below) from this and will continue to edit more as I have time available.

I've also been working on editing still images which are mostly from the pathology microscopy slides that were shown mostly during the first part of the press conference. There is a huge amount of still shots (mostly from the pathology part 1) that I've captured from the video (~150 in total) and I've started editing those as well and will show you some of those here once I go over the summary of what I got out of their press conference review of their data.

My interpretation (I am not a doctor, so this is a lay persons perspective) is that what the pathologists saw in their autopsy research of these individuals is a consistent full body hyper inflammatory response as seen in the lymphocytes in multiple organs. The result of this massive inflammatory response is that the failure of organ systems is basically inevitable and the particular organs that fail will essentially just depend on the health status of each of the organs when this inflammatory response starts.

What was seen system wide is the destruction of muscle cells and an infiltration of lympocytes (indicating inflammation).

When we think about destruction of muscle cells and the heart you can start to realize why things like myocarditis are so serious. These muscle cells (of the heart) apparently don't grow back or regenerate so degradation of these muscle systems will essentially lead to a weak or failing heart.

The discussion among the pathologists seems to indicate that the inflammatory damage in the various organs shows a clear path to various disease syndromes such as myocarditis, endothelial (lining of blood vessels) dysfunction (some showed detached endotheium), lung, liver and kidney dysfunction and many other potentially life threatening conditions depending on the organ that is either the most affected or the weakest at the time of the injection of the poison.

Regarding the examination of the Pfizer Biontech, Johnson & Johnson, and Astra Zeneca vials an important thing to understand is that what is being shown here is "double light shedding" which indicates that it is not biological. These anomalies were discussed with the doctors who asked if they had analyzed other (non-covid) vials and they had analyzed some other product vials and hadn't found anything like this.

Depending on the feedback I will either update this post or add additional parts to it as I get through the editing process but I would like to see a discussion start in the comments below and hope to hear opinions from some medical professionals who can corroborate the findings of these German and Austrian doctors.

First I'll share some of the videos I've edited, then move on to the pathology slide still images which I still have a lot of work to do on them and I apologize if any of them are labeled incorrectly I did my best and have just shared the names I put on them when I created them so there may be some inconsistencies.

My edits are very short so far. Here's the first video edit showing some very strange things from the seemingly toxic vials:

The second video is from a J&J vial showing a strange moving triangular shaped object:

The forth video starts with some more live blood analysis but then gets into a video display of the Pfizer Biontech product which was prepared in a unique way. They cooled the sample residue of the vial which then warms up under the light of the microscope and beomes very active as you can see. Also it shows some very strange shapes! Almost cartoon character looking.

The fifth video is a bit longer and shows a number of anomalous objects that display the "double light shedding" phenomena (as most of the objects shown from the vials do. This one also shows some interesting chain formation that appears to be a single molecule wide. They don't claim that they know what these chain-like objects are but it is interesting that graphene oxide is known to form layers of one molecule in thickness.

Also shown are many metallic looking objects that are quite mobile moving all about the slide. This final video is much longer than the others and as I write this it is still processing by bitchute so if you don't see a video below this please check back later and it will be here eventually.

I've had some requests for video links to my source videos lately. Depending on where the videos are pasted from sometimes you can right click to discover that information. I would prefer if you would share my post directly since I spend a lot of time creating these posts and it can be more compelling to share it along with the context of the post.

But these videos are from my bitchute channel where I'll be posting a lot of videos moving forward:

Now let's examine some of the pathology slides.

This first batch of images came from the discussion about myocarditis and the destruction of muscle fibers. Again these are pathology slides from deceased individuals who had recently been injected. The pathologists seemed to be in agreement that they could attribute 30-40% of the cause of death of these 8 autopsies to be a direct result of the injections based on their many years of experience and examining these cases.

"Fall" is apparently German for subject or case # so the number represents the specific autopsy case.

As I review these images more along with the original video (which you can see here) I'll add more notes. This is only about 10-15% of the images that I've grabbed from my review of the original press conference. More will be posted for review as I work through the rest and I will also work on improving the size and resolution because these seem rather small.

I do hope we have some medical professional review this and add in their commentary to continue the dialog.

The black is apparently representative of the lymphocytes.

Basically my understanding of what we are looking at with these slides is system wide inflammation which is rather extreme and not a normal phenomenon. In other words while some people may have inflammation it doesn't typically look like this in a pathological review.

I believe the two images below are representative of micro-blood clotting in small capillaries:

I believe the slides below are cross sections of a blood vessel showing lyphocytes as well as some endothelial dysfunction.

I believe this was described as "detached endothelium" because the endothelial lining of the blood vessel is supposed to be on the perimeter but here we can see it is no longer bound to the side of the vessel. This clearly could be a distinct reason for so many of the vascular issues we hear about as side effects of these shots. 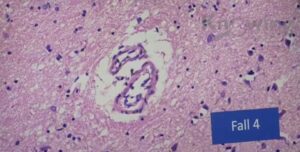 Thanks for visiting and reading. More to come!

Please, please share your thoughts about these images and videos in the comments below whether it's because you are a medical professional or not.

And share this post everywhere to get the word out and help keep a grip on censorship.

Paul Stamets Six Ways Mushrooms Can Save The World

How To Request a Religious Medical Accommodation

How To Remove Graphene Oxide From Your Body